The leaked data, available for free on darknet forum RaidForums, includes personally identifiable information of an undisclosed number of Doxbin users - both hackers and their victims - according to information collated from threat intelligence firm Cyble and independent researcher and threat hunter Troy Hunt.

As of Jan. 8, 380,000 email addresses across user accounts and doxes breached were shared online, according to a tweet by Hunt, who is the founder of the data leak tracking website Have I Been Pwned.

At last count on Thursday, Cyble estimates that more than 700,000 email addresses were leaked. The exposed information includes identities of the threat actors' family members, IP addresses and geolocation, the Cyble report says.

The doxed information includes critical, work-related information that may be exploited to carry out phishing attacks, Cyble says. It warns that there might be a spike in malicious activities, such as identity theft, because of the leak.

Based on the dark web chatter observed by Cyble, it appears that the leaked dox contains information that can augment or corroborate law enforcement agencies' investigative work, says Dhanalakshmi PK, senior director of malware and intelligence research at the company. 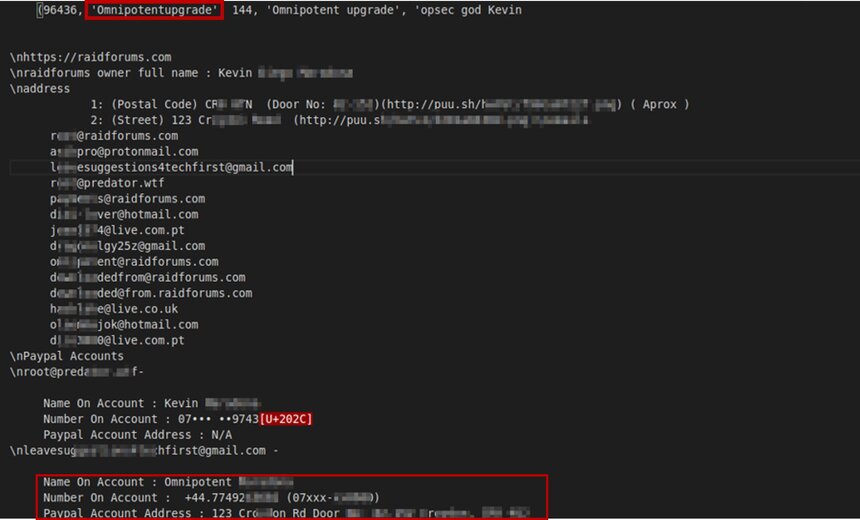 Dhanalakshmi tells Information Security Media Group that the leak may affect the activities of reputed threat actors such as Pompompurin and Omnipotent. The latter is the admin of RaidForums.

Other threat actors, she adds, may use the leaked data to their own advantage. Take stealer logs, for instance: A stealer is a Trojan used by threat actors to gather information from its victims' systems. It allows cybercriminals to quickly search through massive amounts of data.

Cyble's report contains a snapshot of the leaked information and shows how one victim was infected with a mercurial grabber - a stealer used by ransomware groups.

"We have observed instances where forums implode and give out information about administrators and moderators of the said forum. These forums also compete for user time and retention," Dhanalakshmi says.

This isn't a new phenomenon. In August 2021, an insider obtained leaked data about the Conti ransomware group, after a falling out. At the time, Sophos researchers said that the data leak "didn't really amount to much," because ransomware-as-a-service groups tend to keep details about decryption keys and blackmail payments to themselves.

Sophos added that the leak wouldn't help ransomware victims decrypt scrambled files, as the decryption keys were not exposed. The Doxbin data leak, however, does include decryption keys.

An Act of Retribution? 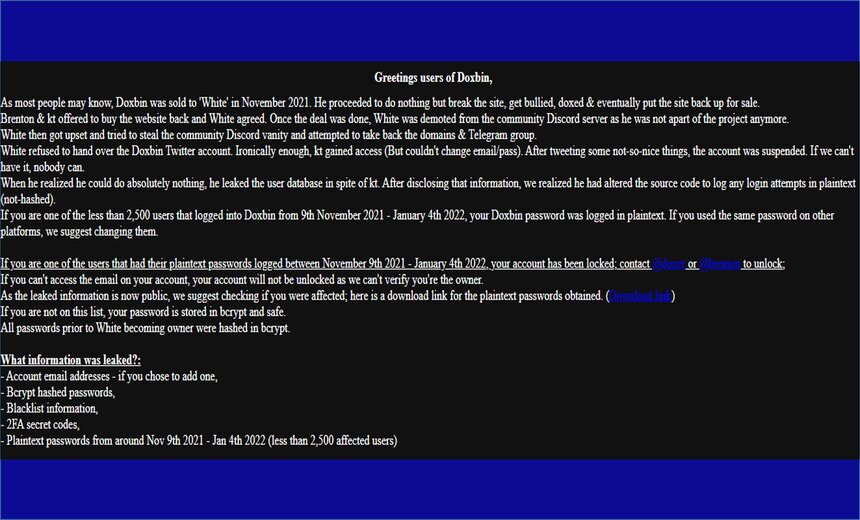 KT and Brenton call themselves the owners and administrators of Doxbin in a note published on the company's website that offers an explanation for the source of the leak.

The note says that Doxbin was sold to 16-year old user Arion Kurtaj, aka "White," in November 2021. But since he could not make significant progress with the platform, he put Doxbin up for sale and was offered a deal by Brenton and KT.

Following the disclosure, Doxbin's new owners realized that White had altered the source code to log any login attempts made in plaintext.

The administrators have warned users that anyone who logged in between Nov. 9, 2021, and Jan. 4, 2022, was at risk of having their Doxbin passwords logged in plaintext.

Doxbin's administrators admit that the compromised information is a serious issue and will have a "heavy impact" on its reputation.

Prior to joining ISMG, Ghosh worked with IDG and wrote for CIO, CSO Online and Computerworld, in addition to anchoring CSO Alert, a security news bulletin. He was also a language and process trainer at [24]7.ai. Ghosh has a degree in broadcast journalism from the Indian Institute of Journalism & New Media.